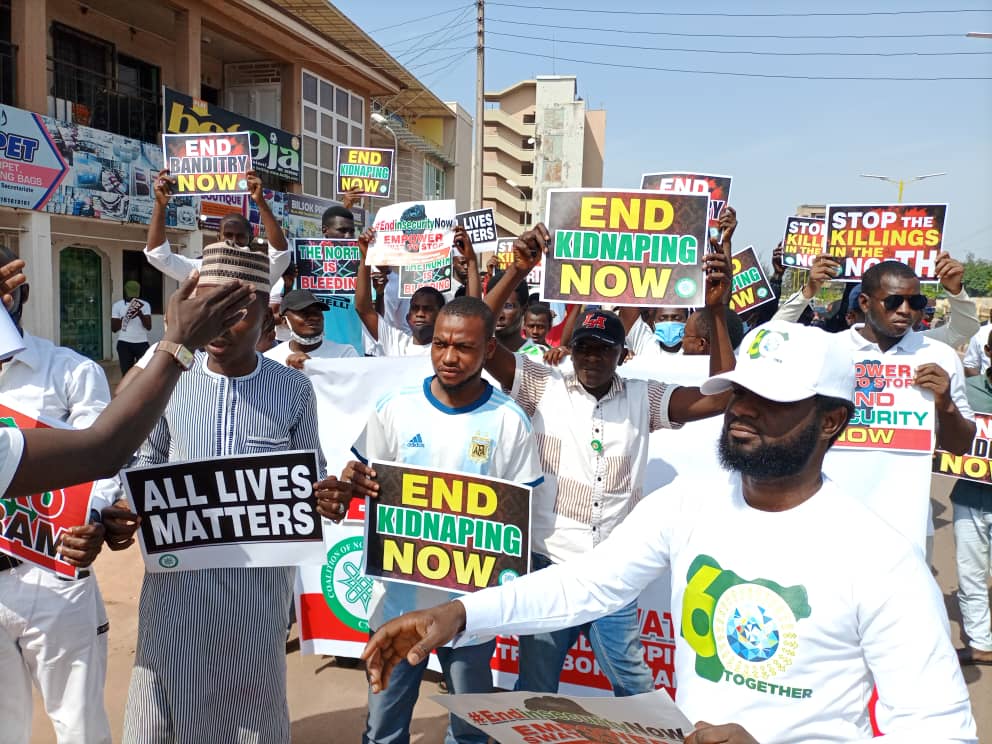 The EndInsecurityNow protesters, under the auspices of Coalition of Northern Groups (CNG), have staged a peaceful protest over the incessant killings, banditry and kidnapping that has been bedevilling Kaduna and other states in the northern part of Nigeria.

They carried various placards and banners with inscriptions that said: “The North is Bleeding”, “Stop the Killings in the North”, “End Boko Haram Now”, “End Banditry Now”, “The blood of the north is crying”, “Empower SWAT to End Insecurity”, “All Lives Matter”, “Stop Rape Now” amongst others.

The Youth Coordinator of the Group, Comrade Sa’ad Bako, lamented the degrading state of affairs in the country, stressing that unemployment, bloodshed and banditry are the elements that are “eating” up the youths.

He maintained that the Federal and State Governments must deploy more security measures and attend to pressing issues in the North.

His words, “We are tired of everything that has been happening in the various states in the North. They are killing our people every day.”

“We have raised alarm, directed to the presidency, through the state government, to end the incessant killings and kidnapping. Villagers cannot sleep peacefully with their eyes closed. Those that are in the urban areas cannot walk freely because of fear of kidnapping”, he lamented.

Meanwhile, security men were pictured barricading and preventing the protesters from gaining entrance into the Kaduna State House of Assembly complex.

The youths, in their hundreds, blocked all the roads leading to the complex and vowed that they would continue to block the roads and protest until the Speaker of the House addresses them.

“We are in the State House of Assembly. The Speaker and members of the House must hear our cry and grievances over what our people are going through”, the aggrieved Youth Coordinator said.

Speaking to our correspondent, Rev. Yohanna Buru, one of the protesters, stated, “I am not happy. All kinds of incessant killings are on-going in the North.”

He lamented, “In North-east, you have insurgency, North-west, banditry and North-central, you have herdsmen and kidnapping. All these forms of evil are happening in our country and our leaders are quiet.”

When asked about the connection of their protest with that of EndSARS, the Reverend said, “Ending of SARS is not our problem. Rather, it is the issue of insecurity, and it is still there because the government has not dealt with it. We must continue with the protest until the government does what we want.”

“Since the government listened when the Southerners called for the end of SARS, then they must hear us”, he maintained.

Speaking on behalf of the Speaker of the Kaduna State House of Assembly, Hon. Tanimu Ahmed Musa, the Member representing Kachia Constituency, addressed the protesters and called for calm.

His words, “You have presented a letter to us on the incessant killings, banditry and kidnapping that has been affecting our society.”

“Your recommendations are noted and we will present it before the House and take appropriate actions as soon as possible.”

“We applaud you for conducting yourself in this peaceful protest and I encourage you to conduct yourselves and remain calm while we take action”, he pleaded.