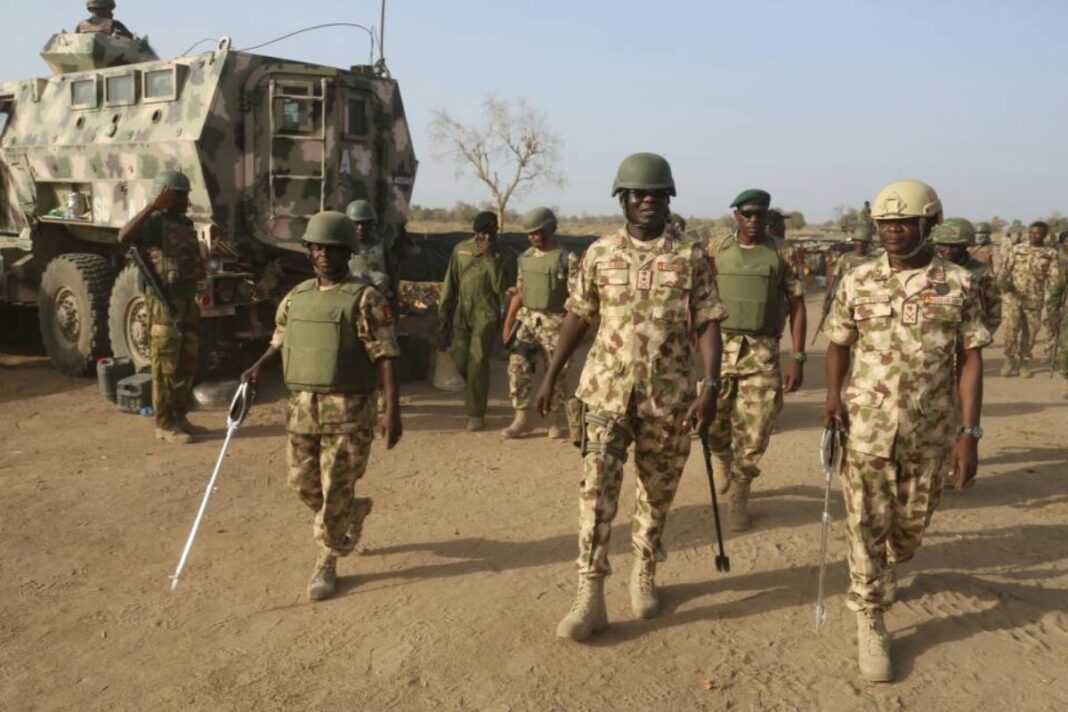 The Nigerian Army, under Operation ‘Sahel Sanity’ has rescued not less than 10 persons, including two teenage boys in the North-West zone.

The two rescued teenagers, Aminu Alka and Nasiru were kidnapped by unknown gunmen in Faskari, Tudun Ali Village and Bagega in Katsina state.

Also, 10 suspects were arrested by the troops in connection with criminal activities ranging from kidnapping, cattle rustling, fabrication of guns, and armed robbery.

The Acting Director, Defence Media Operations, Brigadier General Benard Onyeuko made this known on Thursday while briefing Journalists on the recent achievements of the Nigerian Army in the state.

“The suspects were arrested while attempting to sell 3 rustled cows to unsuspecting customers in the market.”

“Also, troops conducting clearance patrol along Faskari-Sheme road came in contact with suspected bandits. The bandits opened fire on sighting the approaching troops. Nevertheless, the resilient troops closed in on them with superior firepower and forced the bandits to retreat.”

“Upon retreating, they abandoned their victims which include two kidnapped teenage boys, Aminu Alka and Nasiru. The two rescued teenagers have been handed over to Faskari LGA Authority for an onward reunion with their families.”

“Also, same-day, troops deployed at Dandume LGA of Katsina State rescued 4 kidnapped victims from suspected bandits at Tudun Ali village following actionable intelligence from the area. The feat was recorded as bandits fled and abandoned the victims on the arrival of troops at the village.”

“In the same vein, troops deployed at Bagega while on fighting patrol rescued 3 kidnapped victims from suspected bandits’ captivity at Gobirawa village. The rescued victims namely Gaddafi, Sani Bello and Ya’u Abubakar were successfully reunited with their families amid tears of joy and praises for the troops.”

“In another development, gallant troops of Operation SAHEL SANITY thwarted a criminal attempt by bandits to rustle several cattle from villagers at Yadi village in Batsari LGA of Katsina State.”

“The troops who received information about bandits’ activities in the area, quickly mobilized to the village forcing the bandits to abandon all the rustled cattle. All the recovered animals were handed over to the rightful owners by the troops.”

“Also, on 17 August 2020, following credible information, troops arrested a suspected bandit named Dahiru Liman at Ugwan Malama Rama. Preliminary investigation revealed that the suspect has been hibernating in the village following the destruction of their camps at Bakin Lamba during a clearance operation by troops in the area.”

“The bandits are suspected to have hurriedly fled the hideout, abandoning the weapons before the troops arrived.”

“Again, on 19 August 2020, following credible intelligence which revealed the movement of bandits along Marehe-Danlayi-Bena axis with possible intent to rustle cattle in a village around Bena, troops swiftly mobilized and laid ambush along the route and arrested 1 suspected bandit, Bello Abdulrahman with a machete while 2 others escaped into the bush.”

“The suspect is currently undergoing preliminary investigation while efforts are being intensified to apprehend his fleeing accomplices.”

“In another development, same-day on 19 August 2020, troops conducted a cordon and search operation in a suspected building used by bandits and recovered 1 locally made Dane Gun and several charms which were abandoned in a hut at the outskirts of Tsamiya village.”

“Similarly, same day, following a tip-off, troops of Combat Team-4 Operation SAHEL SANITY in the vicinity of Munhaye village conducted cordon and search operation at a building located at the edge of the village suspected to be one of those used by bandits as a rest area. During the search, troops recovered 3 live rounds of 7.62mm Special, some cosmetics, several wrappers, boxes and other household items. Items are suspected to have been looted and used for sustenance by the bandits.”

“Relatedly, on 19 August 2020, troops deployed at Faskari conducted fighting patrol to Yar malamai village following a tip-off, sighted 6 suspected bandits within the vicinity of the village. Accordingly, 4 suspected bandits were apprehended by the troops and currently undergoing investigation.”

Brigadier General Onyeuko further assured the people of Katsina and North-West of the troops’ commitment in ensuring the safety of lives and properties.

He also appealed to them to always avail the troops with information that will assist them in the operation.

“To this end, the gallant troops of Operation SAHEL SANITY are commended for the successes so far achieved and their commitment.”

“They are further urged not to rest on their oars while the people of the North-West are once more assured of troops’ commitment to the safety of lives and property within the zone.”

“They are also encouraged to continue to avail the troops with information that will assist them in the operation.” 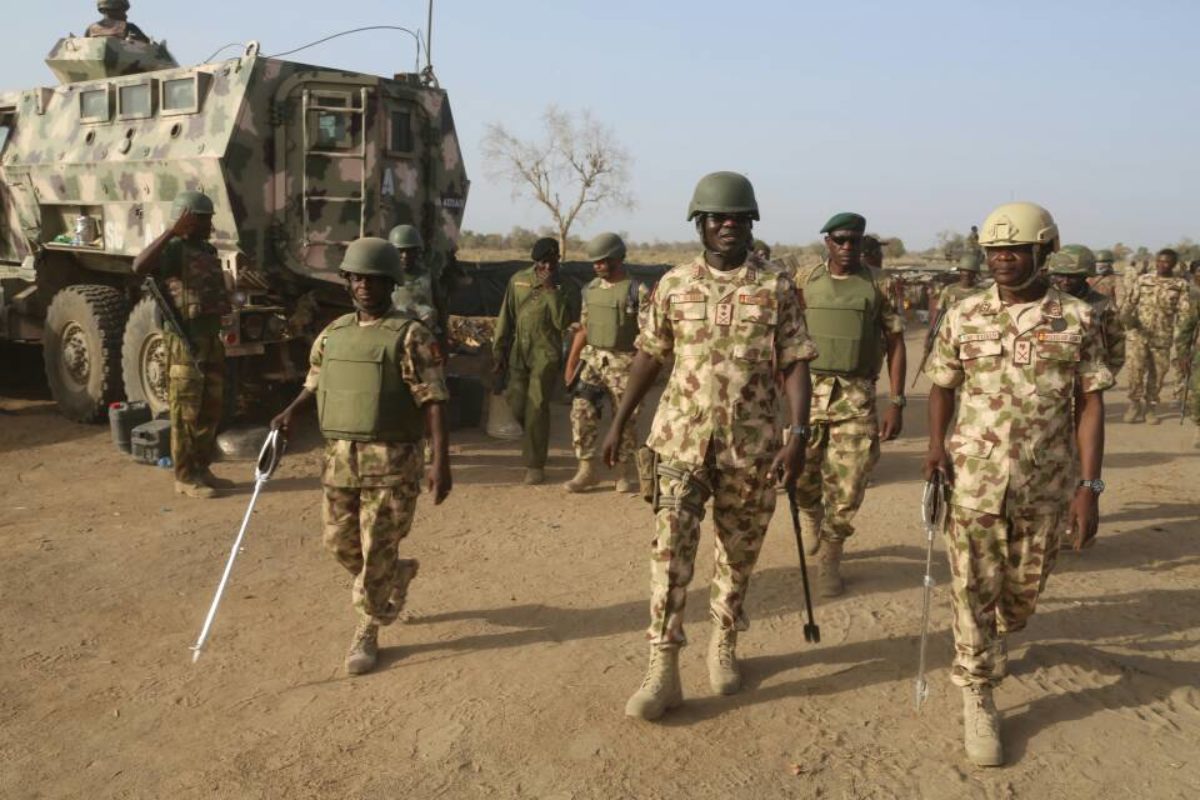 A total of 10 kidnapped victims have been rescued by troops of 'Operation Sahel Sanity' of the Nigerian army in Katsina and Zamfara states. Also arrested...
Read more
News

The troops of the Nigerian Army's Operation Sahel Sanity have successfully disbanded a notorious illegal arms smuggling syndicate that was responsible for supplying arms across...
Read more
News

The Nigerian Army, under the military operation coded "Sahel Sanity", has arrested a suspect who has been impersonating a dead policeman in Bingi, Maru...
Read more
- Advertisement -