The leadership of the opposition party in Nigeria, the People’s Democratic Party (PDP) has asked the federal government and the Independent National Electoral Commission (INEC) to switch to the electronic voting system.

Although the party, which said it would work out the possible modalities for e-voting to be used in her next primaries, added that the system would help to eliminate election violence during voting.

The PDP National Chairman, Mr Uche Secondus made this known while responding to requests presented to the party by Governor David Umahi of Ebonyi state, during the grand finale of the party’s LGA Mega Campaign rally. The campaign rally was held for the council polls slated to hold on Saturday, 29th August across the 13 LGAs and 171 wards in the state.

Also observed was the much emphasized COVID-19 Protocols that were clearly not observed except for the scanty usage of nose masks by the large turnout of supporters.

Also present at the rally, which witnessed large turn up of PDP supporters, were 3 current members of the House of Representatives while the other 3 stayed absent.

Secondus, who spoke for about 15 minutes, cited the Nigerian Bar Association (NBA) of having elected her present leadership through digital voting. He noted that electronic voting is not as cumbersome as is currently being perceived.

He further called on the Federal Government and the Independent National Electoral Commission to emulate the NBA, stressing that the system, when fully utilized, would eliminate election acts of violence which are on the increase during voting.

“Your Excellency, we assure you that the request you have made about our electoral process was received. Very soon, we will start the online digital registration by the grace of God, including the process of voting digitally.”

“And I will request that the Federal Government follow suit so as to eliminate election violence.”

“The killings are too many. The struggle for power and desperation is too much. There will be no need to kill anybody if the people vote digitally.”

“The Nigerian Bar Association has demonstrated clearly that you can be at the comfort of your home and vote and that vote will count.”

“So if they can do it clearly and elect their President, I don’t see the task there, because it is not a nuclear technology.”

“So, the good people of Ebonyi State, I want to assure you to stand with PDP and see how we can digitally vote in our next PDP primaries,” he concluded. 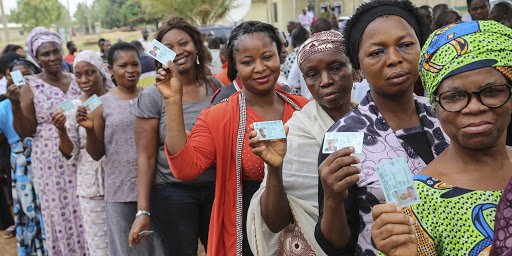 The Peoples Democratic Party ( PDP), Kaduna State Chapter, has stated that Nigerians are not being carried along in the development of the country,...
Read more
Politics

PDP is still the best for Imo State – Ihedioha